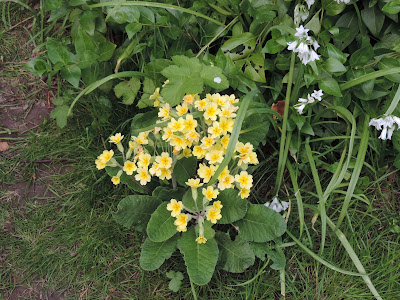 The central plant above is a primrose/cowslip hybrid, Primula x polyantha.  It grows right beside the House Circuit near the corner of the old porch and has been there in robust health for several years.

Primroses are common in the area, but not cowslips.  We have, however, grown cowslips in the garden from time to time and I am pretty certain that this was the source of one of the parents  The variously coloured garden polyanthus are also primrose/polyanthus hybrids and these do grow locally in gardens and hedgerows as 'escapes', but in my experience they do not produce flowers like the one above with cowslip-like clusters of small 'primroses' on each stalk.

This hybrid is sometimes known as the false oxlip.  The true oxlip, Primula elatior, is a species in its own right, but found in the wild in Britain only in East Anglia.  It differs in several ways from the primrose/cowslip hybrid, but a characteristic feature is that its flowers are held to one side rather than symmetrically round the supporting stalk.  There is more on primroses, cowslips and oxlips on the Westfield Wildlife blog:
https://westfieldwildlife.wordpress.com/2012/04/20/primrose-cowslip-and-a-hybrid/

The white flowers to the right in the picture above are three-cornered leeks (Allium triquetrum).  More of them in future posts.
Posted by Patrick Roper at 3:16 pm