In order to get a little more regular excercise, I have taken to walking round the outside of the house, from backdoor to backdoor several times a day if possible.  The distance is just over 50 metres and I travel at about 1km per hour, often stopping to look at things.  The photo below shows the start. 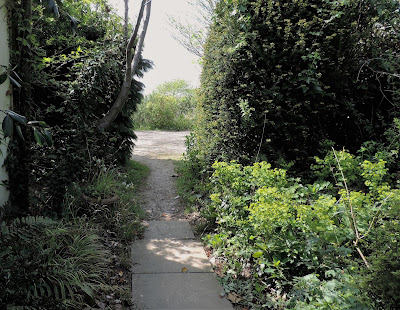 The journey is more complex than one would imagine and is another example of how much pleasure and interest can be gained by focussing on the detail of a relatively small area.  the other day, for example, I found a glow worm crossing the path in full sunshine and a brimstone butterfly was laying eggs on the uppermost shoots of the alder buckthorn.

Highlights at the moment include the small, pink-flowered camellia 'Spring festival'.  I planted this on my wife Cynthia's 50th birthday, 8th February 1986 and it has always grown and flowered well.  A cuspidata/japonica hybrid, it has an Award of Garden Merit from the Royal Horticultural Society. 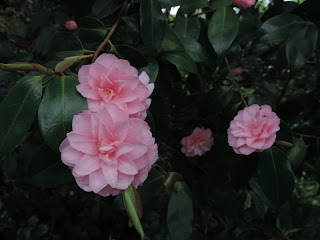 There is also a primrose/cowslip hybrid in full flower (we did once grow some cowslips in this part of the garden and primroses are ubiquitous); 'morello' cherries in white swags all along the southern hedge; pink Clematis montana scrambling over the northern hedge; scarlet japonica and Carolina allspice (Calycanthus floridus) with its strange, scented maroon flowers.  A hornet was hovering around the north west corner of the shed, possibly looking for a nest site (unless it has already found one there).

The blue tits are nesting in the bird box (as they do every year) on the south east corner of the house, but are under threat from the cats.  One jumped up and got his paw through the nest box hole the other day, so our granddaughter garlanded it with a wreath of holly and furze, which seems to have worked without scaring the birds away.

The first hawthorn flowers have appeared in the north hedge, seemingly overnight.  They are common hawthorn (Crataegus monogyna) and not Midland hawthorn (C. laevigata) or the hybrid between the two, both of which usually flower up to a fortnight earlier in this area.  The leaves on this plant are, however, not quite the usual shape for common hawthorn, so I wonder if some different genes have somehow got into the mix locally. 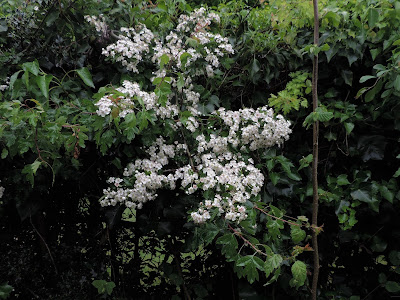 Recorders of wildlife are often asked to note the date when hawthorn starts to flower and the phenologists use this among other information to say whether the season is early or late and then speculate as to whether this is due to global warming, El Niño or these in combination with other phenomena.  However, they should be clear on which of the two British hawthorns and their hybrid they have seen in flower.

Posted by Patrick Roper at 9:55 pm