A bank full of betony

Just below the south of the junction of Compasses Lane and the B2244 Hawkhurst Road on the western bank at TQ7763820510 is a magnificent stand of betony (Betonica officinalis formerly Stachys officinalis). Their rich purple flowers make a landscape feature and the small white-flowered umbellifer pepper saxifrage (Silaum silaus) also grows here, indicating this is long undisturbed grassland. 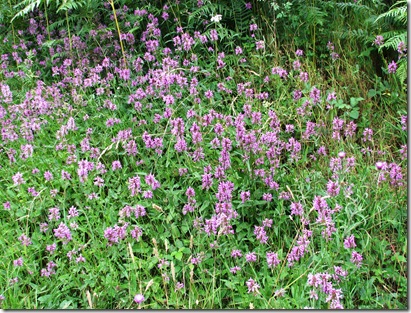 Betony was much used by herbalists in the past and in the Domestic Encyclopaedia of 1803 it says that, among other things it "affects those who gather any quantity of its leaves, with a disorder resembling the effects of intoxication."

Betony garlands worn round the neck were said to suppress nightmares and the Anglo-Saxon Herbal said it would protect against"frightful goblins that go by night and terrible sights and dreams."  If one put an adder within a garland of betony it was said that it would kill itself, while thrusting a leaf up one's nose was regarded as a cure for toothache (Medicina Britannica, 1748).

The now rare great case moth (Coleophora wockeella) feeds only on betony and, as the name suggests, goes about like a hermit crab or caddis larva in a small (not great) case made of bits of the leaves.  There is a picture here: http://ukmoths.org.uk/show.php?bf=527