After the cold and snow 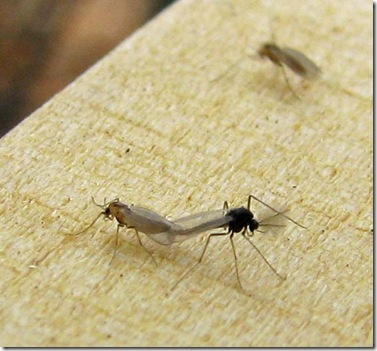 In our garden I have a tower of logs from which I can catch saproxylic invertebrates in a sleeve net (see here.) emerging from or attracted to the decaying wood and its flora of fungi and other plants.

Since 2 January 2010 the trap has been covered in snow and the netting frozen to the top of the top log.

By today it had thawed enough for me to be able to remove it and to see if any insects had gathered inside.

There was a surprisingly large number of species:  Gymnometriocnemus brumalis (see picture above of a mating pair on the roof of a new dormouse box) and Limnophyes minimus , both Diptera: Chironomidae; Bolitophila saundersii (Dipt: Bolitophilidae); Issus coleoptratus, Zygina angusta and Trioza urticae all various kinds of plant hopper (Homoptera); a springtail (Entomobrya nivalis) and a small unidentified spider.

It is remarkable how much invertebrate life there is on the move, even after very cold weather, for those who take the trouble to look.

Posted by Patrick Roper at 5:49 pm