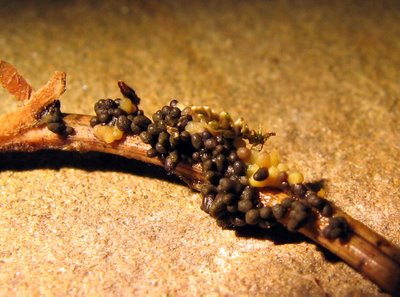 Yesterday I led a walk around Flatropers and Bixley Woods looking for fungi and anything else we could find. Fungi were interesting but not quite as abundant as one might have expected after a warm and relatively wet late summer.

One organism that was new to me was the slime mould Leocarpus fragilis (a Myxomycte, not a fungus). A small patch on a dead Scot's pine needle stood out on the woodland floor due to its bright chrome yellow colour. I put it in a tube for later inspection and, when I had a closer look in the evening, it had turned from a yellow plasmodium (the slime stage) into the greyish brown, grape-like fruiting bodies shown above. Some remnants of the yellow plasmodium can still be seen.

Identification was relatively easy using The Myxomycetes of Britain and Ireland by Bruce Ing (Richmond Publising, 1999)
Posted by Patrick Roper at 9:35 am