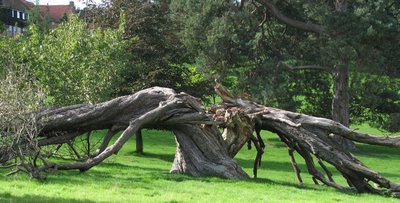 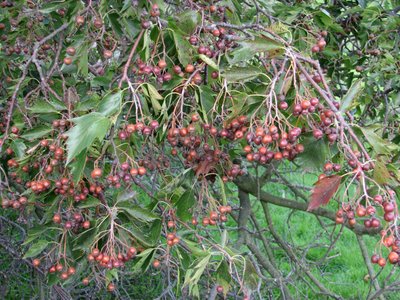 The huge wild service tree, Sorbus torminalis, in Udimore, East Sussex, thought to be the largest in Britain, has collapsed still further and most of its branches lie spreadeagled on the ground.

As with many trees, it has produced a bumper final crop of fruit on the surviving parts to the left of the top picture. But is it final? I think parts of it may survive for a while and the roots may even send up some suckers protected from grazing within the wreckage of the mother tree.

I first saw this particular tree as a picture in a book published in 1945 - it was large then - and it has been on television three times over the last thirty years. Hopefully it will star one more time before its last leaves are shed.
Posted by Patrick Roper at 8:25 pm