14 June 2019               The more westerly of the two dandelion plants consists of two rosettes.  Myathropa flora rested on vegetation in the shadowy back of Submespilus Assart.  This sometimes known as the Batman hoverfly because of the pattern on the thorax  Not very convincing to my mind.  It is also called the dead head hoverfly, because of the resemblance of the markings on the thorax to  a skull.  The goosegrass is flowering.

15 June 2019               One of the roses at the back of the Square metre is affected by leaf roll ‘galls’ of the sawfly Blennocampa phyllocolpa (see below), while the rose at the front of Troy Track has many silvery leaves which may indeed be silverleaf caused by the fungus Chondrostereum purpureum, though the plant seems a little small to host this fungus.  I watched a flesh fly for some time as it foraged among the wood chip near my feet.  Eventually it came and settled on my leg and then on my hand.  Seedlings continue to increase in the Dust Bowl. 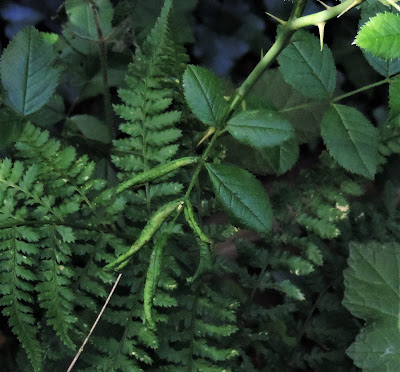 16 June 2019               I photographed the sawfly leaf rolls spotted yesterday.  One of the Epilobiums is in flower.  I make it broad-leaved willowherb, Epilobium montanum but there are many hybrids of this species with close allies.

17 June 2019               A spider has spun a very fine web across the terrine pond.  Underneath there was at least one springtail on the meniscus.  The seedlings continue to increase in the Dust Bowl and I found a colony of yellow Psyllids under a leaf of the cordon oak. 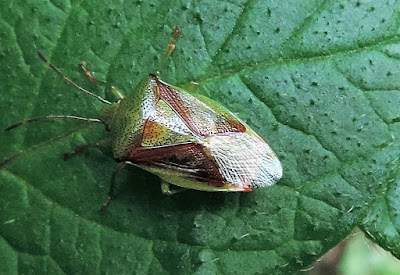 Something has eaten most of the western dandelion.  One flower out on the small flowered sweet-briar.  Dust bowl now quite wet after heavy rainstorms.  The wood dock as been arched over by a clinging black bryony bine.  Lammas shoots (somewhat early) are developing on the cordon oak.

20 June 2019               The western dandelion has been further eaten down.  It was warm after overnight showers.  The water in Second meadow Pond is turning dusky green.  Ivy has become a dominant ground cover in many areas

21 June 2019               Another Midsummer Day but cool and cloudy with a frost warning for parts of Scotland.  Seedlings are now appearing in the Dust Bowl and getting away well in the damp weather.

23 June 2019               Little is now left of the western dandelion and the leaf eater has started on the eastern one.  Yellow is showing on the marsh bird’s-foot trefoil flower buds.  Very warm and humid.

27 June 2019               Showed Clare Blencowe (manager of the Sussex Biodiversity Record Centre) Emthree.  She collected macro and micro fungi and trampled on the dandelions and seedlings in the Second Meadow, but without doing any noticeable damage.  She found a couple pf toadstools on a chunk of chestnut wood in the Square Metre itself and was able to identify them (and have it confirmed) as the white-laced shank (Megacollybia platyphylla): a new record for the Square Metre.

There are aphids on the knapweed and Clare found a blackbird’s eggshell in Second Meadow.

28 June 2019               The heat is gathering strength.  There are many mosquito larvae in the pond and I found a leaf mine on the figwort which might be Liriomyza huidobrensis.

30 June 2019               The end of another month and still quite hot.  I saw two white admirals (or maybe the same one twice) glide over brambly hedge.  With a pair of clippers I have been creating a ‘conservation lawn’ to see what permanently very short sward might do.  Essentially it covers the area I can reach easily from my seat and is the area on the southern part of the Second Meadow.

Today there was a light snow of birch seeds with every breeze and I found a leaf mine in a leaf of the easterly dandelion.

1 July 2019                 There was an interesting article in New Scientist of 22 June 2019 entitled A regular visit to the park is good for you.  It demonstrates that spending 2 hours a week in nature improves health and says “just sitting on a bench will do”.  With all the time I spend sitting in Emthree I must be astonishingly healthy.

Two birds, blue tits I think, flew up as I approached Emthree today.  They were I suspect, drinking at the pond in the Second Meadow.  Self-heal flowers have joined greater bird’s-foot trefoil along the Metre side of Troy Track.  The ragwort and eastern  dandelion on the conservation lawn have leaves touching now.  Closer to the westerly dandelion are two beautiful fallen feathers: steel blue on the narrower half, black on the wider, with a white central quill.

The pond surface is peppered with floating birch seeds.

2 July 2019                 A little cooler now.  I observed a white strap sober moth, Syncopacma larseniella, a gelechiid associated with great bird’s-foot, a plant that is currently flowering across The Metre3. This was recorded on 1st July 2004 and its identity confirmed by dissection of the genitalia.  I am confident that this new sighting will be of the same species.

There was also a brown darkling beetle (Lagria hirta) sunning itself on a hogweed leaf and an attractive, yellow banded sphecid was exploring the Troy Trackside jungle.  The beetle was a new record for Emthree.

3 July 2019                 If I am quiet, I can hear the breeze in the trees, small birdsong and the cooing of a pigeon, occasional wing flutters, the hum of insects, a distant engine.  There are also small clicks and tappings from the undergrowth roundabout of unknown origin, a tiny spaced out percussion.  And I can hear the swish of blood in my brain like an endless sea surge.

A fine cossus hoverfly (Volucella inflata) rested for a while on a leaf of the cordon oak.  It is said to be associated with sap runs and goat moth (Cossus cossus) trees and to favour ancient woodland.

There are 18 flower heads of  greater bird’s-foot trefoil, mostly on the side of Troy Track that bring their own melody to Emthree.

4 July 2019                 The wood inside the cherry log decays faster than the outside bark leaving an undamaged tube of dark reddish brown marked with the characteristic cherry lenticels. There are also several pale brown, polished cherry stones scattered across the Second Meadow and brought, no doubt, from the wild cherry tree further down the garden. Lots of debris in the eponymous pond today and it was only half full again.

6 July 2019                 Visits from a hoverfly, probably Merodon equestris, a large white and a small skipper.  Quite warm and dry.  I have not seen any rough meadow-grass, Poa trivialis, this year but there is plenty of Agrostis.  The side of troy Track is now dominated by knapweed, hogweed and marsh bird’s-foot trefoil.

8 July 2019                 I watched a black fly, a small muscid, running constantly through an area of short grass of Conservation Lawn.  It would stop from time to time, perhaps to feed, but made no attempt to fly.  One of the hazels has grown quite tall in the last month.  I shall grow it as a single stemmed tree.

10 July 2019               Birch seed everywhere: on leaves, on bare ground, on stones, on water in Second Meadow Pond (which has an almost subterranean toadstool growing beside it)..  A young robin joined me briefly in Emthree.

11 July 2019               Quite warm and sunny. There is white powdery mildew Erysiphe alphitoides  on the new oak leaves.  Bent grasses in anthesis are at about their best and there are still a few red campion flowers dotted about.

12 July 2019                  The first hogweed flowers have opened.  They are pale pink rather than white.  Birch seeds continue to shower down and there  are drifts of them in some places.  They land on my clothes and even get into the eye pieces of my binoculars.  There is a tiny brown toadstool  beyond Cynthia’s Ridge, but the one by the pond does not seem to be developing further.  The decaying wood at the southern end of the new cherry log has been hollowed out but some creature and now is a drift of sawdust.

13 July 2019                  Cooler and cloudy but still pleasantly warm.  The Dust Bowl needs rain for the seedlings, but everything else is fine.  The Second Meadow Pond was half empty again.  The hogweed is more fully out and the flowers are now white rather than pink.  I clipped the grass on conservation lawn – I would say there are five or six grass species in the sward.  The easterly dandelion is picking up now with two or three small but uneaten leaves spreading outwards.

14 July 2019                  Something has once again attacked the dandelions reducing both to about a third of their former size.  Whatever has also eaten some of the new leaves of the ragwort on Conservation Lawn.  The Epilobium in Medlar Wood is flowering now and I identified it as another E. montanum.  While examining it I discovered a small but interesting colony of aphids on one of the developing seed pods.  They appear to be Aphis epilobii.

15 July 2019                  No overnight visitor, so the pond remains full and the dandelions and ragwort have not been further eaten.  There are dark chocolate purple egg rafts of mosquitoes on Second Meadow Pond.
Looking at a big pouch mine (probably Pegomya solennis)  on common sorrel I spotted towards the back of M3 some swollen, bright green, unopened red campion flowers.  These are caused by the Cecidomyid midge Contarinia steini.

16 July 2019                  Quite hot again. Visits from a red admiral, a pair of meadow browns and, on blackberry flowers in Brambly Hedge, a male gatekeeper.  The hogweed flowers attracted a greenbottle (Lucilia sp.), a solitary bee and a Gasteruption.  These latter are gangly parasitic wasps from the Gasteruptiidae family whose hosts are the larvae of solitary bees.

I found a powdery mildew I think is Erysiphe heraclei on hogweed leaves.  Like frost on the undersides.

17 July 2019                  The first harvestman of the season made its way cautiously across the vegetation on the northern side of Troy Track.   In the Square Metre I photographed a constellation of birch seeds trapped in a spider’s web (below). 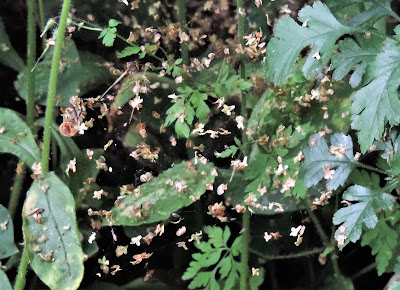