Note: House Circuit posts are drawn from the many walks I make every day around our house.

There is a number of New Zealand plants in our garden, mostly from my old friend the late Graham Hutchins of County Park Nursery in Hornchurch, Essex.  In recent weeks two have been noticeable - Corokia cotoneaster and a Libertia. 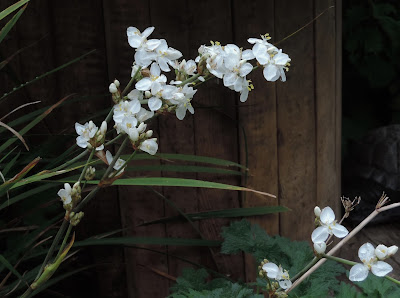 The Libertia (above) produces its white flowers during May and June.  It is, I think, L. chilensis but may be L. grandiflora and there is great confusion in the nomenclature of this genus.  L. chilensis seems to be, as the name indicates, a Chilean species introduced to New Zealand where it joins several other native species from the genus.  It is known in New Zealand and elsewhere as the New Zealand Satin Flower and mikoikoi in Maori.  The genus was named after Marie-Anne Libert, a 19th century Belgian botanist.  Her own nomenclature appears to be somewhat confused too as she is sometimes known as Anne-Marie Libert.

Our plants came from a small clump I found many years ago on a rubbish dump in Devon and it has proved hardy and easy to grow here.  The flowers are attractive to a range of insects.  The linear leaves are very tough and make good plant ties.  It is said that this toughness made them resistant to grazing by moas, those huge, extinct New Zealand birds of the Dinornithiformes order.  This attribute would not perhaps be necessary in Chile, but may have protected them against grazing by rheas, flightless birds (ratites) related to ostriches.

The other new Zealand plant I want to mention today is the wire-netting bush, Corokia cotoneaster or, in Maori, korokio.  We have an old plant that flourishes in a south west corner outside the porch. It flowers every year, but has never produced its red berries.  It has been used for hedging as it has wiry, contorted twigs suitable for this. 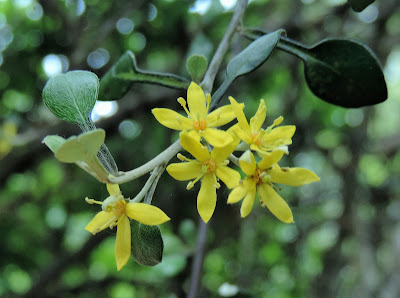 The leaves are brownish green and spoon shaped and it has been claimed that if boiled they provide instant relief from stomach ache.  The wood contains beta-sitosterol, one of the compounds used to lower blood cholesterol.