From mild to cold

In the last few days the exceptionally mild, wet period seems to have ended and we have had several overnight frosts. 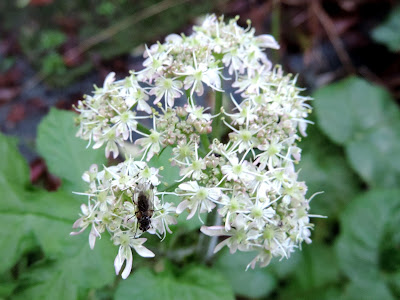 The relatively high winter temperatures seem to have produced uneven effects.  As I wrote on 31st December, many camellias are flowering already and daffodils are out here and there in the village, though they do not look comfortable.  Hazel catkins are now just starting to expand and are slightly later than usual and there are no snowdrops out in our garden yet.  Perhaps these need a cold spell, like many seeds, to trigger them into action.

The unseasonal warmth has allowed some plants to flower on beyond their season.  The hogweed to the right (with a visiting anthomyiid fly) was photographed here on 7th January.  Normally a late summer flowering species, it grows in our lawn and has probably been cut back by mowing but has grown up again and continued its development long past its normal season.