Spread of the fern smut moth 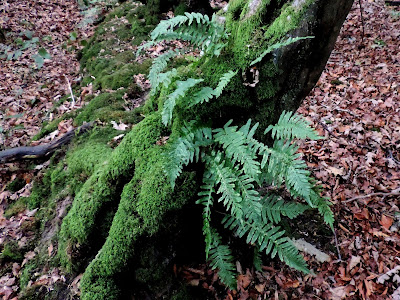 There are a few plants of the wintergreen common polypody fern (Polypodium vulgare) growing in Killingan Wood at OS grid ref. TQ781190 about 200 metres from our house.  The one below is growing on the base of a mossy hornbeam trunk. 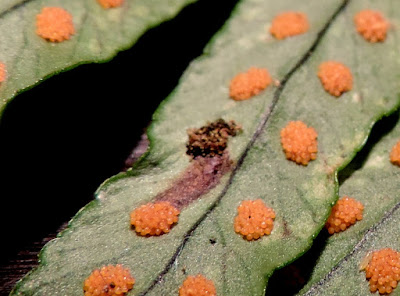 On taking a closer look at the underside of the fronds I discovered several greyish scars next to damaged sporangia (the round, spore-containing structures on the underside of the fronds).           These manifestations seemed to be small leaf mines, or cocoon-like structures, and the inmates had clearly been feeding on the sporangia.  I am fairly certain they are evidence of the young larvae of the fern smut moth (Psychoides filicivora) - there isn't much else they could be - but I will try and breed some through to confirm the identity.

The fern smut was first discovered in Ireland in 1909, and in mainland Britain in 1940 and is thought to have been introduced to the British Isles on imported ferns.  In the 1990s it was discovered in Madeira where it is thought to be a native endemic.  Most British records seem to be in the West Country and north and south Wales, but it is gradually moving inland perhaps, like so many recent arrivals, helped by an increasingly milder climate.

Rather appropriately I found this insect on the day of the Paris Agreement at the United Nations  Conférence sur les Changements Climatique (Conference on Climate Change) when 195 nations agreed to do their best to control global warming.