From this time of year we always have two or three woodpigeons (Columba palumbus) eating the ivy berries on top of the hedge and in the tree behind. 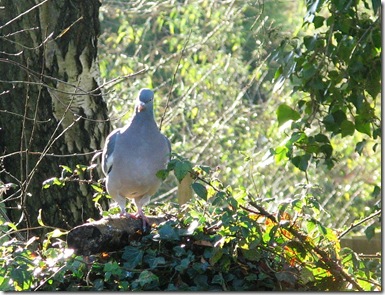 Ivy berries contain toxins, but many birds seem able to cope with them.  Pigeons, however, eat the rather soft seed where the toxins are said to be concentrated, as well as the fruit pulp and can destroy over 75% of the ivy seed crop.  They start with the unripe berries at this time of year and continue to feed on them right through to spring when they are properly ripe.

A small mid-November treat today was the appearance of the beautiful plume moth (Amblyptilia acanthodactyla) on the wall by our back door.  This second generation emerges in autumn and goes into hibernation until spring, but this one quite evidently had not yet decided to settle down despite the fact that we have already had a couple of frosts. 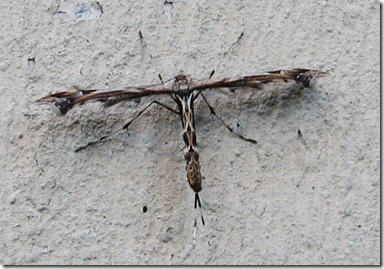 The larvae feed on a variety of plants including hedge woundwort (Stachys sylvatica), of which we have a very large patch only a few metres from where I found the moth today.

The beautiful plume is one of those species that is increasing and these days is increasingly found in gardens, highlighting their value for some forms of wildlife.

Posted by Patrick Roper at 8:26 pm