A friend who lives in the Bohemia Road area of Hastings phoned yesterday evening to say that I might not believe this but a yellow, black spotted snake had appeared in their kitchen sink. 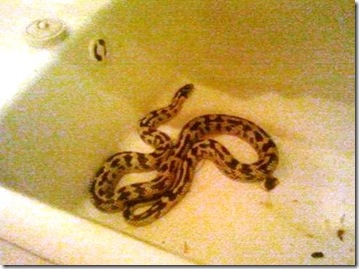 They had covered the sink with a board, but lifted it long enough to take the photo above which they texted to me.  After various phone calls and emails they managed to find a local vet with an interest in snakes to come and take the unexpected visitor to more congenial quarters.  He also confirmed its identity as a king snake.

I think it is a hybrid between the desert king snake, Lampropeltis getula splendida, and the speckled king snake, Lampropeltis getula holbrooki.  Various forms of these snakes are popular among reptile enthusiasts and www.thekingsnake.co.uk says "They have a relatively docile temperament and can be easily tamed. They are energetic and inquisitive and make very interesting pets. They are easy and safe to handle, growing to a manageable size and make a good choice for people who are new to snake keeping."

However, I doubt whether the Hastings climate is suitable for them to make a permanent home in the town outside captivity.

Posted by Patrick Roper at 2:29 pm