By the Tesco superstore, Hollington, Hastings.

On the eastern side of Tescos superstore there is an asphalt path running uphill over mown grass to the streets and houses on the Tilekiln estate. To the west is ancient woodland, a northern extension of Church Wood still with yellow archangel peeping under the chestnut post and rail fence and with plenty of bluebells beneath the leafing hornbeams and other trees.

On the other side of the path it is mostly mown grass up to the fence round the Tesco buildings, but in the middle of this is a deep gully that was once the bed of a stream running into the lower part of Church Wood but now culverted for much of its length (Grid Ref. TQ7861311733). It is rather encouragingly full of a very varied scrub and I imagine the species count would be high if an extended ecological survey were undertaken. 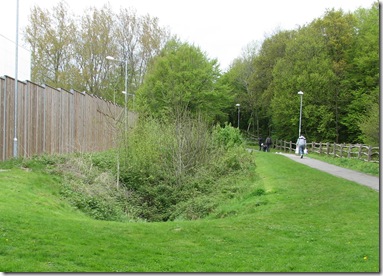 There were fresh green brambles, white ball-bearing buds of hawthorn, oak and ash entwined with honeysuckle and flowering sedge while, in the distance, a woodpigeon was cooing persistently.

On the edge of the gully I found a fine plant of spotted medick (Medicago arabica) with tiny, yellow flowers.  I is native in southern Britain that is said to be expanding its range for reasons that are not entirely clear. It seems to be widespread in Sussex. 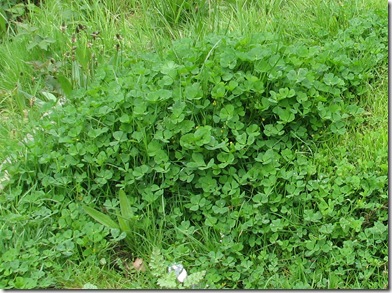 In several other places were plants of ribwort plantain (Plantago lanceolata) with their rough, pod-like flower heads already developed (see behind the medick above). I saw some being used in a masterchef salad on television the other day and the authors of the Walk around Britain website say “The fresh seeds of both species make a very good protein nibble, tasting rather like mushrooms.” I tried a flower head. It didn’t taste bad, but had a rough, chaff-like quality making it difficult to swallow.

Two teenage girls and a boy were wandering about clearly trying to think of something to do. They chattered loudly and talked a bit about me, a stranger, but were good humoured and cheerful when I made some irrelevant reply. They made no further remarks after they had seen me eating ribwort plantain flowers – I can’t think why.

Posted by Patrick Roper at 4:02 pm