We see all sorts of things in the garden from our sitting room window: rabbits, foxes, weasels, badgers and all manner of birds and insects.

Today we were given two special treats.  First a green woodpecker spent some time on our small lawn, pecking with evident relish at something in the grass. 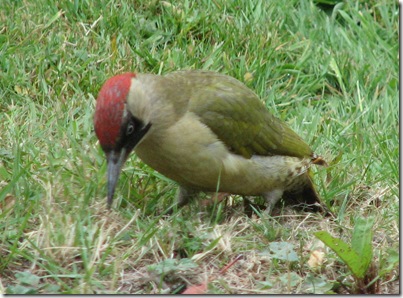 It was not possible to see what the bird found so tasty, but there were some light showers overnight, and this may have brought a few insects to the surface in these drought-stricken days.

The other treat was a small tortoiseshell butterfly (Aglais urticae) enjoying the nectar in a large flowered clematis. 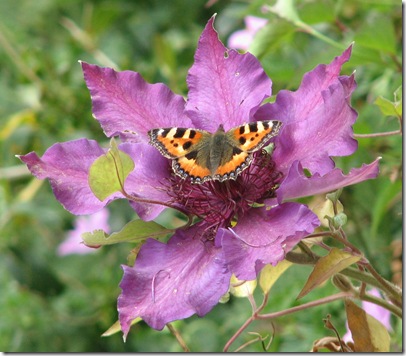 Such highly engineered blossoms don not, generally, seem to be much visited by insects, but the butterfly returned repeatedly and, as far as I could see, visited no other flowers.

The small tortoiseshell has suffered a massive decline in recent years and it is thought this is due to a parasitic tachinid fly called Sturmia bella, first recorded in  Britain in the late 1990s.  However, the butterfly seems to be making a comeback and several were seen in this area last year after a period of total absence.  I wonder how it has managed to outwit the parasite, if that is what was causing the problem.  perhaps like the holly blue and its parasitic wasp, the large number of caterpillars affected means that eventually the parasite almost runs out of hosts and becomes scarce, only to return in force as the abundance of the butterfly increases.

Posted by Patrick Roper at 9:19 pm