At the end of our garden I have an open-ended hanging sleeve trap over an artificial water-filled tree hole.  Today, after about a week of hard frosts, I was surprised to find a small brimstone moth caterpillar inside the trap. 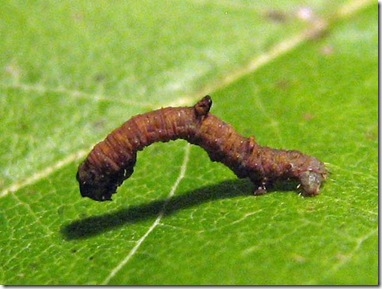 The brimstone moth (Opisthograptis luteolata) is a common species with several generations a year and often there are overwintering larvae, though it is difficult to see what they eat if they are very active like this one.  Normally they feed on the leaves of deciduous shrubs like hawthorn and blackthorn.

Mine keeps casting round the box and the various leaves I have provided, but does not seem to be eating any of them.  Maybe I will just let it go again rather than breed it through.

The caterpillars do, of course, look very much like thorn twigs, though in some areas they are green rather than brown.  The explanation for this dimorphism does not seem to be known, but it is not uncommon in the caterpillar world.

Posted by Patrick Roper at 8:53 pm