On emerging from our back door today after a second spell of cold and snow, the first thing that caught my eye was a woodlouse about a metre up on the wall.  Not exactly a sheltered position but one that perhaps gathers some heat from the kitchen behind. 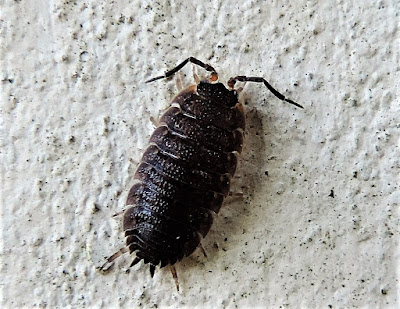 Woodlice (or isopods) are interesting subjects of study for those who like invertebrates.  There is a manageable number - nearly 40 British natives or outdoor breeders (and a few more in greenhouses) -and, unlike many invertebrates they are around all the time and can often be found just as easily in summer as in winter.  They also have an interesting range of parasitoids and predators, do not sting or bite, cannot be classed as pests and are easy to collect and keep alive.  Identification is fairly straightforward with the AIDGAP guide A key to the Woodlice of Britain and Ireland by Stephen Hopkin and published by the Field Studies Council.  There is also a British Myriapod and Isopod Group which promotes the study of these and some other invertebrate groups: http://www.bmig.org.uk/

The woodlouse in the picture on our wall above is the common rough woodlouse, Porcellio scaber, a very common species in the British Isles.  The orange bases of the antennae in this example is a frequent feature of this species.