On a walk near Staplecross, East Sussex yesterday I noticed two small mating butterflies.  At first I thought they might be hairstreaks, then gatekeepers, but the photo below indicated that they were meadow browns, but almost half the normal size. 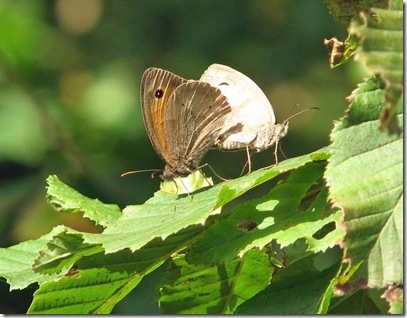 The one on the right is pale because its wings are tilted towards the sun.

This butterfly is normally common in our area from June to mid-August and this is the latest I have seen them, though they are known to occur as adults as late as October.

These late emergences are said to occur more frequently where there is short (and therefore warm) turf on the Downs and in similar places and several authors have noted that these late-flying butterflies are often smaller.

Apparently this species only has one generation a year, so these cannot be the offspring of earlier-flying adults.

It is curious though that both butterflies in the picture are of a similar small size and must have emerged at broadly the same time and one wonders why the idea of their being a second generation has not been considered.

Posted by Patrick Roper at 9:25 pm No comments: